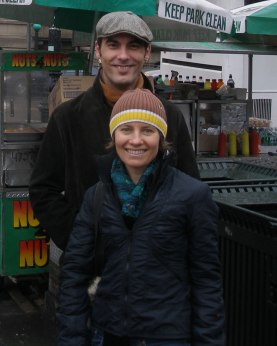 On the 3rd of May 2009 there will be three years since the still unsolved disappearance of graphic designer Iulian DUNA, in the Metropolitan area of Seattle, WA. Graduate of the School of Arts (Belle Artes) from Cluj Napoca (Romania)  class of graphic design, Iulian DUNA starts his journey into his profession at UBISOFT ROMANIA, a company specialized on graphics and animation for computer video games. His talent, the work and his dedication that he proves while working to perfect his art will eventually bring to “Iulica” – a nickname that everyone knows Iulian DUNA – a recognition in the professional circles, from experts in plastic arts.

Being at the age when relationships are done relatively easy, Iulian DUNA – being 28 years old at the time – starts in October 2005 a friendship with Ana GABRIEL (presently 43 years old) , an US citizen of Romanian roots. At the end of that year he receives the tourist visa for USA, and in January 2006 he arrives in America, where for his first two weeks he lives in NY. In February 2006, after a ten day visit to “The Fabulos Las Vegas”, Iulian and Ana settle themselves in Seattle, in the house of Ana’s relatives: Constantin Adamovici and Nina Toma, who offers them accommodation.

For the young graphic designer and his girlfriend will follow a time of great tensions and small fights which surprisingly doesn’t end in complete separation, but only in temporary break-ups, during which she decides to sleep over night with her friends.
“Wednesday morning I reminded him that during the evening we will not see eachother, but I invited him on Thursday afternoon to my place of work, where, after the opening night a party will follow, and I suggested him to dress appropriately / accordingly ”
He said “OK”.

“We wished a nice day exchanging a small kiss”, remembers Ana, in 2006. It was the last time when “Iulica” and his girlfriend get to meet each other, because unexpectedly , on May 3rd Iulian DUNA disappears.

The family starts the process of finding him, by alerting the Romanian Embassy in the USA, an action left to date without any answer. All that his mother and his sister – left in Romania  can gather as information is the fact that Ana and Iulian had a new fight on the evening of May 2nd, ended with Ana leaving the place to sleep with some friends in the town. In the next morning, since the bicycle with which “Iulica” made his trips to and from work is missing, Constantin and Nina draw the conclusion that “Iulica” went to work. They did not get suspicious until late evening , when “Iulica” doesn’t show up, at home, back from work.

The missing incident is then announced to the Seattle PD, but the answer received is one of the nature of not bringing any comfort, but to raise more worries: even though “Iulica” is in the data base for missing persons, an investigation cannot be started. The reason : Iulian DUNA is an adult that left of his own free will that domicile, which implies the fact that he no longer wants to get in touch with the family (from Romania) – a plausible story for Seattle PD. It however remains to be explained how the communication between him (Iulian DUNA) and his family back in Romania stopped, as well – a communication that was done from America weekly by Iulian DUNA either on e-mail, or by electronic messenger. More than that, his mother and his sister remembered their last conversation with Iulian in which “Iulica” was kind of disappointed that after over three months since he was in “The Promised Land” he was not capable to find the dream job he wanted, or at least a suitable job for his skills.

That was then, and now, the present looks exactly the same. In the last six months, tired and disappointed of so many tries with no results what so ever, the two women – his mother and his sister – have no more power to fight; they accepted the faith and all that they can do is to hope and to think of different scenarios ,… In their opinion Iulian DUNA is either the victim of a severe depression, generated by loneliness, and the lack of financial and moral support, or he was killed, if he associated in America with the wrong crowd.

The story of the graphic designer has been portrait ed on both ends of the Atlantic, in mass-media, in Romania, and in the US, due to the efforts of his family who informed Romanian TV News Channel “Antena 1”, in Romania. His story was presented by news-papers and Romanian ethnic magazines like “Clipa”, “Gandacul de Colorado”, “Romanian Times”, “Clujeanul”, “Sibianul”, “Adevarul”, “Averea”, “Libertatea”. At the same time FBI was involved, and started an investigation: there were taken statements from people that knew Iulian, and with whom Iulian had contact prior to his disappearance; also DNA samples were taken, studied, and were been stored for identification purposes. Ana Gabriel was also heard by an FBI Special Agent in connection with her boyfriend disappearance.

We got in contact with Ana  Iulian’s last girlfriend in US  and she gave us her opinion, with respect to the plausible facts, in her understanding: it is either an abandonment case, or an inexplicable decision on Iulian’s part to cut off all links and relationships with family, friends, and acquaintances. Also an accident may be the explanation, followed eventually by an amnesia, or even a severe depression. She does not dismiss the suicide version.

Together with a cousin of Iulian who’s settled in the US, Ana states that she tried to hire a PI to go on and reveal what happened. Unfortunately the retainer and the cost of the PI for his services were huge above her financial possibilities, or Iulain’s family budget  this in part because without status in the US, Iulian had no credit cards, no SS#, no medical records, nothing to trace down, … In conclusion : Since the Summer of 2007 nothing has been heard on this matter.

Now, Ana keeps in touch regularly with the sister and the mother of his disappeared boyfriend. Also the mother and the sister of Iulian keep in touch with Iulian’s cousin that lives in US, as well as with Mrs. Nina Toma, his former landlady. In a mixture of contradicting feelings, going from frustration to hope, missing the loved one and the lack of power to help, desperation and contempt for the way in which the local authorities understand to bring their help to the table, the two desperate women are at the end of their ropes, emotionally. They consider that there is nothing to be done, for them. They have only one wish: for him to show up, to receive a sign from Iulian … or at least to have confirmed his death, so a proper Christian burial can be started. Unfortunately, the more time goes by, the two women understand that there is no one else, but God to help them in their ordeal. Their main disappointment goes towards the Romanian Embassy in the US, but they are upset also on the low priority of the FBI investigation in the case of their son and brother.

There are already three years since the events took place, and Iulian didn’t showed up, and news about him are as well, inexistent. Still, in the heart of his mom, and his sister, the memories didn’t fade, but contrary, continue to be as vivid, and as intense, as in the day the entire nightmare begun. Iulian’s image remained and will further remain alive, in their hearts : an active individual, surrounded by friends, full of life, with a great sense of humor, a socialite bearing full confidence in his talent and in his inner values, a true artist ” as he proclaimed himself ” who dreamed to go to America, to work for Disney, to accomplish himself as a professional and to leave his mark in the field of computerized graphics .
Beyond of the border of memories, among tears, bitterness and sadness, in the mind of his family still stands a question mark: who would have deprived “Iulica” of his freedom, to just profit on his brilliant already recognized talent as a graphic designer .

If there are people who have information about Iulian Duna, we kindly ask them to write us at the following e-mail address: justitia@justice.com